Recently, We The MG did an interview with Booking Agent Zach Mullinax. Artists are always looking to do more shows and they’re interested in getting a booking agent, Zach has some advice….

Zach Mullinax is an agent at Variety Artists International which represents a roster of exclusive talent including 311, Incubus, Robin Trower and many more.

Music Gorilla: To start off, please tell us a little about yourself, what you do, and how you got started.

Zach Mullinax: Hi MusicGorilla – thanks for inviting me to do this interview.
I got my start (like a lot of other music agents) on my college campus activities board at Cal Poly San Luis Obispo. After a few years of playing baseball, I decided it was time to pursue another passion that I could potentially turn into a career.

It was a great way to learn the business. I soaked everything up. Sometimes we would promote shows in-house, and sometimes we would rent our facilities to outside promoters. There is a promoter on the central coast named Bruce Howard who sat down with me at his shows and really helped teach me the ropes. Being an independent promoter is one of the hardest jobs out there, so it was a great perspective to learn from.

Anyways, I wound up booking a few shows from an agency called Variety Artists International, who happened to be located in San Luis Obispo. They gave me a chance to intern for them the summer before my senior year. I was hooked! I wanted to help build artists careers, instead of just interacting with them for one night on a tour stop, and this was a perfect way to do that.

Bob Engel, John Harrington and Lloyd St. Martin have been amazing mentors and family to me. I’ll never forget when I first started and Bob and John said, “You want to be an agent? So be an agent. Go sign some acts!” No corporate ladder. Just get after it. I love that!

ZM: I think about this question all the time. The funny thing is, its easier to book a $100,000 show than a $100 show. At 100k people are coming to you asking to book it. At $100, most of the promoters probably don’t know the band and its a real “Pitch” you have to make. So yea, the emerging acts fight harder for dates and tours. 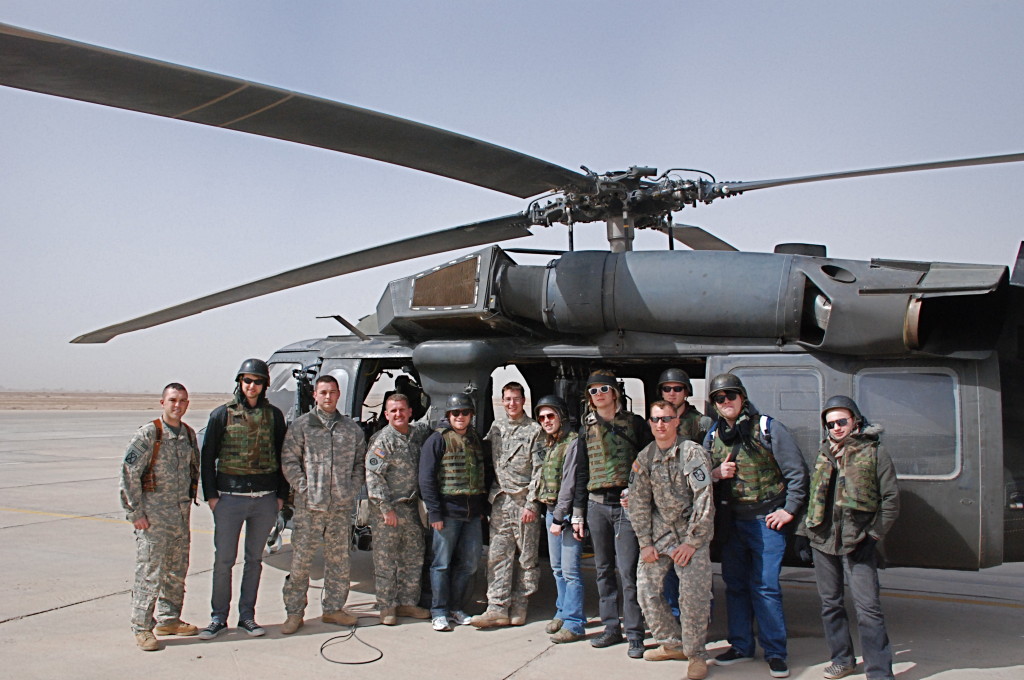 Zach Mullinax (in the blue sweatshirt 4 from the left) with Quietdrive in Iraq on a Armed Forces Entertainment tour in 2008.

MG: How would an artist get on your radar? And how would they get signed to your agency?

ZM: This questions might be answered different by every agent you ask. First off, we have to love the music. Secondly its important to us that we like who we are doing business with. Third, we usually like to see a team in place behind the artists (Mgmt, label, press, etc).

You gotta keep in mind, even if you sign to an agency, that doesn’t mean you’ll be on tour with the Rolling Stones, or bump your money up from $100 to $1,000 overnight. Its a building process.

Because we are a boutique agency, I do like to think we really focus on the clients we have. We are detailed on the deal terms, and good at taking a $5,000 act to that $10-15k range.

MG: If an artist isn’t yet ready for the level of your agency, what can they do to improve their chances for future consideration? And how should they keep you informed of their progress?

ZM: For us, the biggest barometer is headline draw. Focus on that, and you’ll be amazed the doors that will open for you. Its important to keep a prospective agent in the loop with what you have going on, but don’t be too desperate. Agents can tell a fluffed stat from the real deal pretty easily. Two spins a week on a radio station in Santa Fe doesn’t help me get a gig for you in Boston.

MG: How should an artist approach you? How do you feel about cold calls, press kits and the like?

ZM: Email is usually the best way. I listen to everything that comes our way. There is some great music out there, and I wish I could help every act, but obviously there is only so much time in the day.

MG: How big a part do artists social network profiles and numbers play in your evaluation of them?

ZM: Honestly, I used to pay a lot more attention to it. When I first started booking tours Myspace was just getting going. There were acts I worked with who had never played cities that I knew could sell out rooms, strictly because of their online stats.
I know having a big online presence is very important, but for some reason its just not as big of factor to me as it used to be.

MG: How do you feel about the state of the Music Industry and where do you think it’s headed?

ZM: People are listening to more music than they ever have, and technology is making it so much easier to get that music out to the world. I’d say the future is bright!

MG: What’s the most frustrating thing about your job?

ZM: The most frustrating part of my job is working with incredible talent that don’t get the recognition they deserve. I wish I could flip a switch and make someone a household name and its hard to accept there’s only so much I can do as a booking agent.

MG: What advice would you give a band just starting out?

ZM: Patience. We live in a society of instant gratification, but bands don’t break over night.
Also – its very helpful to work with a band that has spent time booking their own shows. It puts context to my job, and I find bands that have done this have a better perspective on the industry.

MG: Does a band need to work just as hard to stay on your roster as they do to get on it?

ZM: Yes. I once had a baseball coach that summed it up when he told our team, “I can’t want to win more than you guys do. It won’t work that way.”

MG: Who would be your dream client?

ZM: I’m fortunate to work with some amazing Alternative Rock acts, but I actually grew up on r&b. Boyz II Men would be awesome!

MG: Anything else you think we should know?

ZM: Loyalty means everything to an agent or manager that donates their time early in your career.

MG: Thanks so much for your time!